Today June 21st is summer solstice which means that today will be the longest day and the shortest night of the year. Diagram of the Earth’s seasons as seen from the north. Far left: summer solstice

According to Wikipedia, summer solstice occurs when the Earth’s and moon axial tilt is most inclined towards the sun which is why the days near the solstice have the most daylight of any days of the year.

There are different interpretations worldwide on this event. Many recognize it as a sign of fertility involving holidays, festivals, gatherings or rituals.  In England for example, thousands will gather at Stonehenge and Avebury to welcome the sunrise on the Summer Solstice.

The Maya were quite accomplished astronomers. Their primary interest, in contrast to “western” astronomers, were Zenial Passages when the Sun crossed over the Maya latitudes. On an annual basis the sun travels to its summer solstice point, or the latitude of 23-1/3 degrees north.

Most of the Maya cities were located south of this latitude, meaning that they could observe the sun directly overhead during the time that the sun was passing over their latitude. This happened twice a year, evenly spaced around the day of solstice.

The Maya could easily determine these dates, because at local noon, they cast no shadow. Zenial passage observations are possible only in the Tropics and were quite unknown to the Spanish conquistadors who descended upon the Yucatan peninsula in the 16th century. The Maya had a god to represented this position of the Sun called the Diving God.

The Maya believed the Earth was flat with four corners. Each corner represented a cardinal direction. Each direction had a color: east-red; north-white; west-black; south-yellow. Green was the center. At each corner, there was a jaguar of a different color that supported the sky. The jaguars were called bacabs. Mayans believed that four jaguars held up the sky. 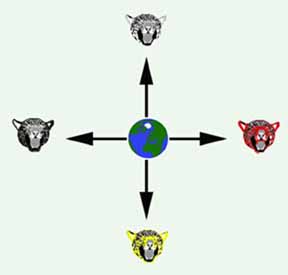 Do you celebrate summer solstice? Let us know your plans for the longest day of the year by commenting below.

Restore your work-life balance in Belize: The Case for a Work-Free Escape